Belts supply power to various components such as the Alternator, Power Steering, AC Compressor, Water pump and in some designs, the camshaft/crankshaft.  When a belt fails the component(s) for which it is supplying power can’t function.  Hoses carry fluids for various systems.  The Cooling, HVAC, Power Steering and braking systems all rely on hoses to carry fluids for proper system operation.  If a hose begins leaking, or blows completely, the system can’t perform properly.

Belts should be checked regularly for wear and proper tension.  Timing belts should be changed at the recommended manufacturer recommended interval.  If your timing belt fails, your car won’t run.  Also, depending on the design of your engine, a broken timing belt could cause internal engine damage.  Your hoses too should also be inspected on a regular basis.  The fluids they carry are vital to the proper operation of your vehicle.

Some signs of problems with your belts and/or hoses include; squealing or chirping noises, fluid on the ground, overheating, no heating, no air conditioning, hard to steer, noise when turning, no start, spongy or sinking brake or clutch pedal.

The HVAC system of your vehicle provides heating and cooling to the passenger compartment to keep you comfortable year round.

Loss of heat, the smell of coolant or steam through the vents and moisture on the floor are all signs of a malfunctioning heating system component(s).  A clogged or leaking heater core is a common problem.  Depending on the vehicle, the heater core can be buried deep within the dash and replacing it is job that takes several hours.

Ventilation – The ventilation system consists of mode doors and blend doors.  Mode doors either allow air from the outside into the cabin or recirculate the air from inside the cabin.  They also direct the airflow such as to the floor, face, or defrost positions.  The blend doors control the temperature by either allowing or restricting airflow past the AC evaporator or heater core.

Problems with the ventilation system could result in restricted air flow, the inability to direct air flow, or noise when using your heat or AC.

If you notice that the air is a little warmer than usual with the AC on, the refrigerant level may be low.  Low refrigerant levels result when there is a leak in the system.  Warmer air could also be a result of a component failure.  When your AC isn’t blowing cold and it’s hot outside, you may be tempted buy one of those DIY AC charge kits from the local auto parts store.  We strongly advise against it.  Your vehicle’s AC system is very sensitive and requires a precise amount of refrigerant to operate properly.  Overcharging a system can result in costly component damage.  It’s best to leave AC diagnosis and repair to professionals who have the necessary equipment to properly diagnose the problem and to monitor and measure exactly how much refrigerant is being put into the system.

The brake system is the most important safety feature of your vehicle.  Quite simply, it enables your vehicle to stop and keeps it from rolling when parked.  There are several components to the braking system; brake pedal, master cylinder, calipers, rotors/drums, brake pads/linings, brake hoses/lines, park brake shoes/drums.  In addition to the components that stop your car and keep it from rolling when parked, there are the brake lights that let other drivers know that you are slowing down and/or stopping.  Then there is the Anti-Lock Brake System (ABS) and Traction Control System.  The ABS is designed to help maintain control in the event of an emergency stop.  Whereas the Traction Control System is designed to help maintain control while accelerating.

Your brake system gets used every time you operate your car, so you can expect there to be wear and the need to replace components such as brake pads and rotors from time to time.  How often depends on the vehicle and your own driving/stopping habits.  You can minimize brake wear by not riding the brake pedal when driving and giving yourself ample stopping time to avoid hard stops.  But at some point, no matter how easy you are on the brakes, they’re going to need servicing.  Insuring that your brake system is in sound working order should be your number one priority.  It’s best to have your brakes inspected on a regular basis (at least yearly) or when you suspect a problem.  Signs that it’s time for a brake inspection include; illuminated warning lights, squeaking or grinding noise when braking, a brake pedal that sinks to the floor, pulsation when stopping.

Your vehicle’s drivetrain consists of the engine, transmission, clutch, transfer case, differential, drive shaft and axles.  The exact configuration is dependent on the year, make, model and options of the vehicle but in essence the components of the drivetrain are designed to transfer energy from the engine to the transmission through the differential and to the wheels to get your car moving.

Engine – Using a combination of air, fuel, pressure and electricity, all controlled by intricate computerized systems, your engine generates combustion to produce the energy which ultimately gets your car moving.  Basic components include the engine block, combustion chamber, cylinder head(s), pistons, crankshaft, camshaft, timing system and valve train.  When your engine doesn’t get the proper mixture of air, fuel and pressure, or when it’s missing spark, or the timing is off, the car won’t run properly.

Regular maintenance is the best way to keep your car running smoothly.  Changing your engine oil and filter at the recommend intervals and using the recommended weight of oil is critical to engine performance.  Engine oil keeps the engine lubricated and helps to minimize friction.  When engine oil remains in the engine for too long it eventually breaks down, allowing friction to build and causing damage to internal engine parts.  Making sure that your engine’s cooling system is working properly is equally important.  If your engine is allowed to overheat, significant internal damage can occur.  Changing your spark plugs and timing belt at the manufacturer recommended interval is also critical in keeping your car running smoothly.  Signs of problems include; check engine light, running rough, low power, deteriorated fuel economy, stalling and not starting, fluid on the ground.

Transmission – The transmission changes the amount of power and speed to the wheels by changing gear ratios.  This power is transferred through a series of other components such as the Transfer Case, Differential, Drive shaft and axles.  The components and configuration are dependent on the vehicle:

A manual transmission utilizes a “clutch” which engages and disengages the transmission and allows the driver to manually change gears.  An automatic transmission automatically changes gears to optimize rpm’s by delivering the right amount of power to the wheels for the driving condition.

Just like your engine, your transmission, and the components that transfer power to your wheels need regular inspections and service to keep you rolling along.  Having the fluids checked on a regular basis and following your vehicle manufacturer’s recommended service schedule is always a good idea.  Most shops will check your fluids during a routine engine oil change.  Signs that you need to bring your car in for an inspection include; late hard shifting, illuminated warning lights, fluid on the ground, vibration or noises such as whining, grinding or clunking/clicking.

Your engine generates a significant amount of heat when running.  The cooling system is designed to keep engines running at optimal temperatures by dissipating the heat that’s generated through normal operation.  Primary cooling system components are the radiator, overflow/expansion tank, radiator fan, water pump, thermostat and hoses.  The radiator cools the coolant.  The overflow/expansion tank allows for the expansion and recovery of coolant.  The water pump circulates coolant via hoses through the radiator and the engine.  The thermostat controls the flow of coolant.  And the radiator fan provides additional cooling when the radiator alone can’t keep the engine at optimal temperature.   A failure of any of these components will result in your car overheating.  Always keep an eye on your temperature when driving.  If your car begins to run hot, shut it down and call a tow truck.  Continued operation can cause catastrophic failure of your engine and/or components which can result in very costly repairs.

Your coolant should be checked regularly.  Most shops do this during a routine oil change.  Additionally, your coolant should be replaced at regular intervals as recommended by your vehicle’s manufacturer.  The most common sign that your cooling system has a problem(s), other than the vehicle running hot, is the loss of coolant.  Depending on the problem, you may or may not see fluid on the ground, so again, it’s important to check your coolant level often.  If you have to add coolant on a regular basis, there is something wrong.

The electrical system is the brain of your car.  It consists not only of the charging and starting systems (alternator, battery and starter), but also very intricate and interrelated wiring, sensors, switches and computers that keep everything working.

Electrical problems can be very difficult to diagnose as the symptoms could be just about anything.  Everything in your car relies to some degree and in one way or another on the electrical system.  You may have a misfire and think that you need to replace the spark plugs, when in fact the problem could be a camshaft position sensor or wiring.  A thermostat that’s not opening could be because of a faulty coolant temp sensor.  Your AC may not be blowing cold because of a faulty pressure switch.  The list goes on and on.  When it comes to performance issues, it’s best to take your car to a professional technician for proper diagnosis.

The performance of your vehicle’s engine is dependent on proper operation of several other systems and components.  The engine’s mechanical components such as the engine block, combustion chamber, cylinder head(s), pistons, crankshaft, camshaft, timing system and valvetrain must be in good operating order.  In addition, the lubrication, fuel delivery, ignition, cooling, exhaust and electronic control systems must all also be functioning properly.  A failure in any of these areas will impact the performance of your vehicle.

Some of the problems you may experience as a result of poor engine performance include; an illuminated check engine light, decreased fuel economy, misfiring, stalling, hard starting, hesitation, overheating, oil consumption, smoke from the engine compartment or tailpipe.

The exhaust system of your vehicle is designed to expel harmful gases and fumes created from the combustion chamber of your engine.  Components include; exhaust manifold, pipe, oxygen sensor(s), catalytic converter, muffler and tailpipe.

The exhaust manifold is attached to the cylinder head(s) and combines the exhaust from each cylinder into one pipe.  Oxygen sensors monitor the amount of oxygen that is present in the exhaust.  The catalytic converter converts harmful gases into water vapor and carbon dioxide, the muffler quiets the noise generated by the engine and the exhaust is expelled through the tailpipe.  Problems with your exhaust system may result in an illuminated check engine light, loud engine, exhaust smells in the passenger compartment and decreased fuel economy.

The steering components of your car allow you to adjust the direction the vehicle is traveling by turning the steering wheel and the suspension components are designed to keep your wheels on the road and provide a smooth ride by absorbing the dips and bumps in the road. 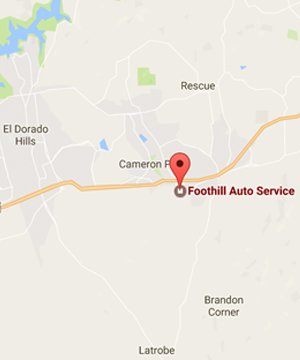